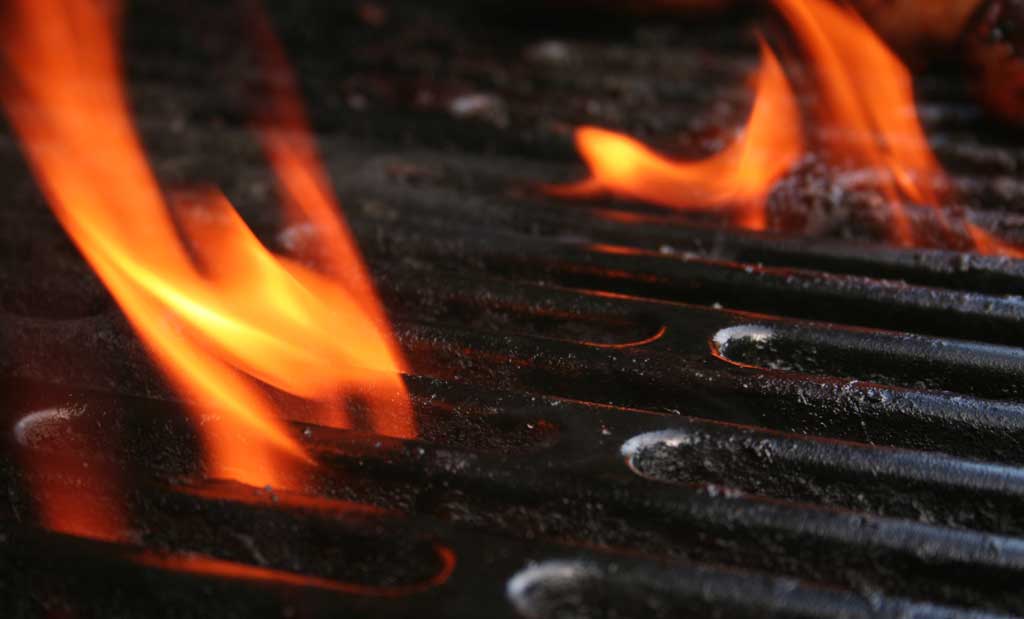 In addition to marking the cultural beginning of summer, Memorial Day kicks off the outdoor cooking season as many people uncover their grills and smokers for the first time since autumn.

For seasonal or novice patio jockeys, we offer perspectives and pointers from those who grill, barbecue or smoke food year-round. The common denominators are learning from and embracing each experience while you (re)ignite a passion for cooking meats and vegetables with open flames, white-hot coals or aromatic smoke.

Make Veggies Magical on the Grill

Candace Conley, chef/owner of The Girl Can Cook!, says the trick to grilling vegetables is, “in the words of Thoreau, ‘Simplify, simplify.’”

Vegetables don’t need a lot of marinades, rubs or extra flavors to add a delicious dish to your cookout, she says.

“With a drizzle of olive oil, sea or kosher salt and freshly ground pepper, vegetables will absolutely sing,” Conley says. “That simple preparation brings out all their natural sweetness and true flavors.”

Conley has some specific advice on grilling vegetables:

Use a grill pan, even on an open outdoor grill, and tongs to control flare-ups and avoid losing vegetables through the grates. Conley doesn’t recommend grilling baskets, because it may be difficult to tell what’s ready to come off the grill.

Think about which vegetables you’re grilling simultaneously. Summer squash and zucchini cook well together, but don’t pair them with onions or bell peppers, which take longer to cook.

Parboil or “parcook” potatoes before grilling them.

“They are so dense, they will burn on the outside before cooking through,” Conley says.

Don’t overcook vegetables. You want their brilliant colors to show and not turn gray due to overcooking. Al dente is your friend.

Use medium to medium-high heat, and be patient. Don’t walk away, because it only takes seconds to burn it all up.

Jason Campbell, executive chef at Mary Eddy’s Kitchen x Lounge in Oklahoma City, brings a gourmet touch to the grilling table with a smoked lamb shoulder to drool over.

“When choosing a meat to smoke at a barbecue, lamb is often overlooked, but it is my favorite meat to put on the smoker for a few hours and then serve as smoked lamb gyros,” Campbell says. “I like to use the shoulder, either bone-in or boneless. I actually prefer the boneless. If you get the boneless shoulder, you can unroll it, rub the seasoning on both sides and the inside, then roll and tie it back up for maximum flavor.”

Lamb shoulder has just the right amount of fat, which helps baste the meat as you smoke it and keep it juicy.

“Charred lamb fat is one of the best things on earth, and it cooks in half the time as a pork butt, which can take over eight hours to be ready to eat,” Campbell says. “My inspiration comes from the Moonlite Bar-B-Q Inn in Owensboro, Kentucky, famous for their smoked lamb.

“I prefer American lamb because it has a milder flavor over the New Zealand or Australian lamb, which tastes more gamey. Another great cut of lamb for grilling or smoking is a lamb shoulder blade steak. You cook it to your desired temperature, just like a steak.”

Campbell gives his smoked lamb shoulder a Greek twist by seasoning with plenty of garlic, rosemary, cumin, crushed red pepper flakes and lemon zest. He then lets it rest in the fridge overnight to let the flavors soak in the meat.

When smoking lamb, he prefers a temperature of 250-280 degrees to render the fat, and he uses apple wood because of its subtle flavor.

It takes four to six hours to become tender, and you want the lamb to reach 180 to 200 degrees.

“A pro move is to wrap the lamb in foil after it hits 160 degrees,” Campbell says. “Let it rest for about 45 minutes before slicing or pulling and save the remaining juice to pour back on the meat.”

Once smoked, he prepares gyros with all of the usual toppings – tomato, onion and tzatziki sauce – and enjoys an ice-cold beer, he says.

Instead of starting with those brontosaurus-sized beef ribs or meaty pork ribs, take a few practice runs with baby back ribs, which are well-marbled and cook faster.

Before buying them, inspect the ribs. Avoid “shiners,” which are more bone (shiny bones) than meat.

When preparing ribs for the grill, peel the papery membrane (the pleura) off the back. Starting with a middle bone, slip in a slender implement, such as the tip of a meat thermometer, between the membrane and one of the bones under it. Using a kitchen towel or pliers to gain a secure grip, pull off the membrane … or ask your butcher to do this before you take the ribs home.

Don’t boil your ribs first. Yes, some people do this, but doing so makes stock and cooks away flavor.

Don’t be a typical guy. Too much seasoning or gallons of sauce does not make a better rib.

For 25 years, C.R. Head of Head Country Bar-B-Q in Ponca City has prepared barbecue for others – from personal backyard get-togethers to catering jobs feeding 4,000 people. He says the basic principles apply to barbecue, no matter the size of crowd, with the most important being: Don’t give up. Head says he can “still toast a brisket every now and then, so just keep in mind that no one is perfect.” Following are some tips he gives to beginners at events across the state. For more information, products and recipes, go to headcountry.com.

Hands Off for Juicy Burgers

William Lyle, executive chef at Tulsa’s Summit Club, brings gourmet dishes to members, but he also enjoys an afternoon firing up the grill with friends. He puts the same effort into burgers that he does into seared skate wing.

Keep seasoning simple, he says: “Take your typical salt, pepper and garlic grill seasoning and add paprika and brown sugar. This will guarantee better color and caramelization when grilling your burger.”

Most importantly, “Stop touching the meat,” he says with emphasis.

Place 5-7 ounces of ground beef onto a dinner plate and gently press it until it fills the plate. Apply seasoning liberally, and carefully flip the burger and apply more seasoning.

“This large, thin patty will caramelize faster, taste better and remain juicier than your typical over-handled ‘thick’ burger,” he says. “Only flip the burger once and never press. Finally, find a fresh baked bun and toast it in a pan – with butter if possible.”

It’s kind of a grill … without leaving grill marks. It’s kind of a smoker … without as much dense flavor getting into meat. It controls temperatures easily like a propane grill … but needs electricity. And it bakes food like an oven … only outside the house.

It is the increasingly popular pellet-fired grill, with an electric motor feeding compressed-sawdust modules into a combustion chamber. An electric fan blows heat into the cooking/baking area (like a convection oven).

Because it combines several platforms, this hybrid is generally more expensive than a charcoal or gas grill and a conventional smoker. Some outdoor cooks swear by pellet grills; many purists disagree.

Following is a list of summer barbecue cookoffs around the state.

In his previous life as a health-care executive, Scott Grigsby wasted time viewing inappropriate stuff on the internet. His boss even chastised him for it.

Grigsby didn’t have an uncle who smoked whole pigs out in the woods or a father who hosted backyard barbecues.

“My dad was the worst cook on a grill known to man, so I taught myself,” he says.

At age 11 – and using a computer to access the then-nascent World Wide Web – Grigsby taught himself how to smoke and barbecue “every meat that can go on a grill. I’m a trial-and-error guy. I spent my time researching instead of watching sports on TV.”

He left the health-care industry nearly 12 years ago to begin Everything Barbecue, where he combines his zeal for outdoor cooking with business savvy. He says his accumulated knowledge and experience add value to the equipment and products that he sells.

“If I have a guy come and he wants to learn how to smoke meat, we ask him a lot of questions, like how much time and commitment he wants to make,” Grigsby says. “If his eyes start to glaze over after about three minutes, we can tell he might want to try something different.

“But, if the guy has the time, then that’s a different story, because then we can talk to him about equipment, types of meats, preparation, rubs and sauces.”

Grigsby stresses that “working the pit” is vital, because consistent heat and smoke often determine the desired outcome.

“You have to see to the fire every hour,” says Grigsby, adding that variables (wind, ambient temperature, humidity and types of wood) make each experience at the smoker a bit different. “Many guys like the therapy of tending the fire and serving food that everyone likes. It’s delayed gratification.

“If you want instantaneous results, you’re not that guy.”

Grigsby often uses golf as an analogy for smoking meats.

“Having the type of equipment that suits what you want is one club in your bag,” he says. “Learning about the cuts of meat is another club. Understanding what to do with the meat’s membrane is another club. Gaining experience is another.”

One of the most popular grills in the world was invented in Tulsa: the Hasty-Bake. It’s no surprise there are a slew of made-in-Oklahoma barbecue products gracing store shelves today, including the following: 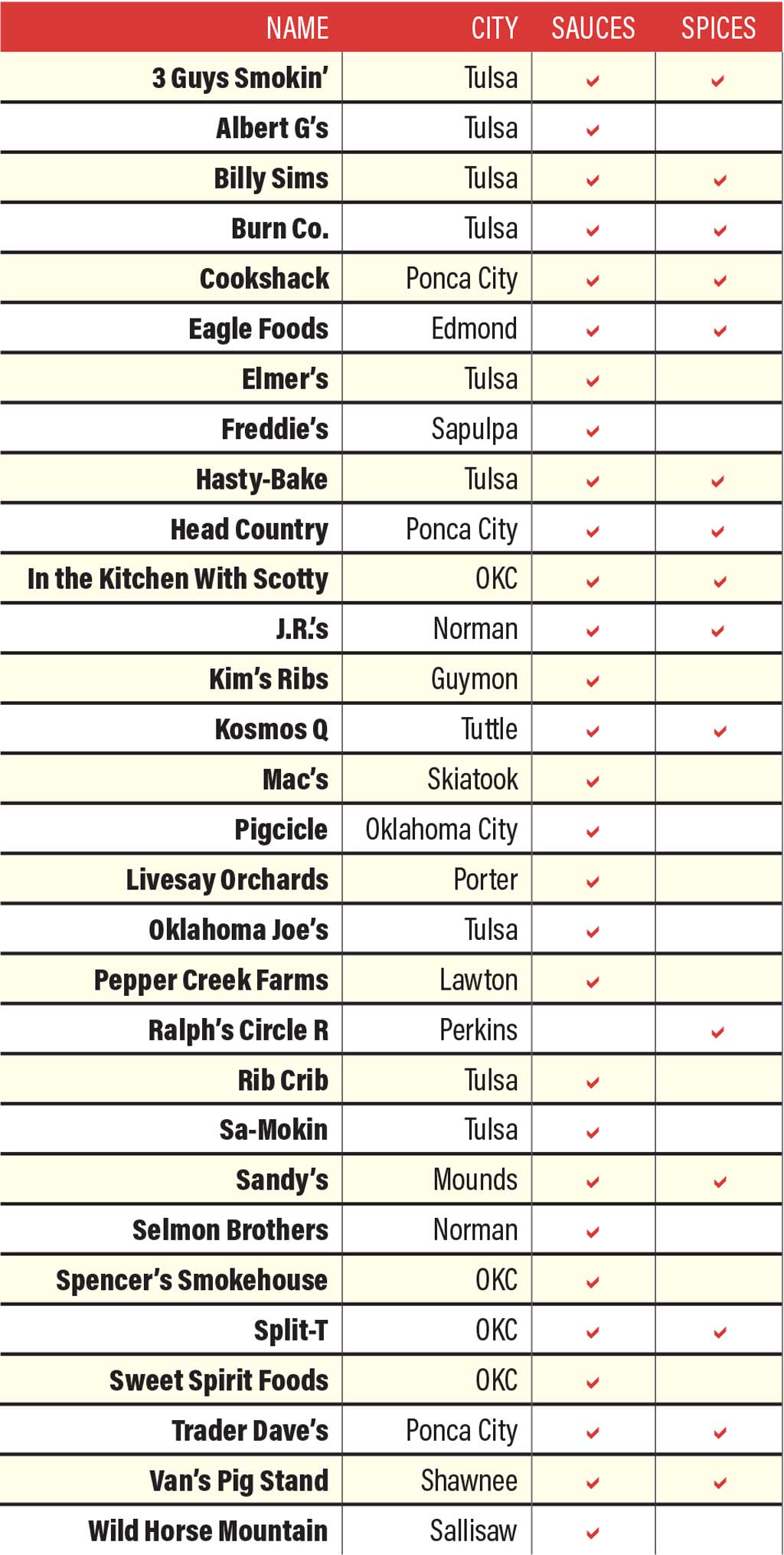